Social media is defined as the democratization of content and a shift in the role that made humans in the process of reading and disseminating information. Gone are the days where we as humans mainly communicate with others through physical interaction. Today’s young adults live a life caught between two worlds: the physical world of human interaction and the digital universe that sits just a mouse click away. This is an age in which entire relationships are formed over online digital platforms, and a single person’s opinion can be broadcasted worldwide in a matter of seconds. Lately, the freedom of expression that social media has given young adults has triggered interesting behavior among users of such social media platforms as Facebook and Twitter. The term “slacktivism” was created in 1995 by Dwight Ozard and Fred Clark. It is defined as an expression of doing something in support of an issue or cause that requires minimal personal effort, and is now used to describe this new behavior; where everyday activists broadcast their different causes to the Web to gain exposure and support, and users believe they’ve done their part to support the cause by commenting or tweeting about it. Every day, hundreds of new pages or videos are created and shared on Facebook and Twitter and passive online supporters are quick to hit the ‘like’ button, but is that really enough? The question that is raised today is; can social media activism have a tangible effect on real problems?

It’s easy to notice the change in how our generation communicates with one another in comparison to older generations. My parents grew up in an era where the primary source of interaction was with each other in person or over the phone; nowadays that level of physical interaction has been greatly reduced. Social media networking sites has changed the way in which we communicate and the interaction we obtain face-to-face.

With the lack of physical interaction, it becomes increasingly difficult to truly get to know a person which leaves us with the question of; how do we find out more about on another? We create an opinion about who a person may be based on their digital profile. Some examples of this would be your Facebook, LinkedIn, or Twitter profile. And much like when you fill a house with furniture that reflects your style, one will fill their digital profile with elements that they believe make up who they are. Everything from the decorative colors you use to the pages that you follow or ‘like’ is indicative of the person you are. People use digital profiles to bring awareness and support to a cause however some of us take a more passive route to show support for the causes we believe in. Our digital effort gives us a false sense of feeling very useful and important but in essence we have zero social impact. It takes nothing to join yet another Facebook group so we click “yes” without even blinking, but the truth is that it may distract us from helping the same cause in more productive ways. Our efforts to lend a helping hand to the cause ends there instead of getting out in the world and really making a change.

I’m sure everyone in America is privy to a recent trend in the media called the ALS Ice Bucket Challenge. If not, I can easily sum it up by saying one will pour a bucket of ice water on themselves after nominating other people to do the same challenge; most choose a few friends to participate. The deal was: if nominated you had 24 hours to complete the challenge or donate $100. However this exchange quickly evaded most people. Pouring ice water over one’s head hardly begins the journey to benefit this cause on top of organizations dedicated to researching a cure for this disease not receiving extra funding. The purpose of the ice bucket challenge was to bring awareness to ALS, a disease that didn’t receive much recognition in comparison to other diseases such as Breast Cancer. Ultimately this goal was achieved; it had people who never heard of ALS prior to this year finally becoming aware of it. It quickly became popular in the media once celebrities started participating and nominated other influential people. However, bringing only awareness to a cause is half the battle. What really makes a difference are fund raising events, just talking about an issue isn’t enough anymore. 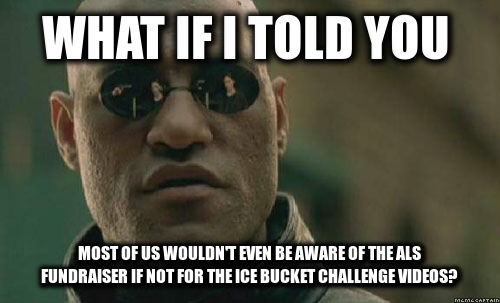 So again I ask; can social media activism have a tangible effect on real problems? To that I’d have to say NO. Social media helps bring awareness of an issue but I don’t believe any actual changes occur even with awareness. Out of one million people who believe in the same cause, only a handful will actually dedicate the time and effort to help. Others think they did their part by reading a clip of information about it.

One thought on “Slacktivism in Social Media”